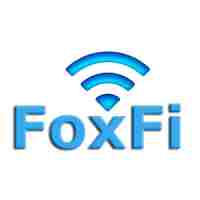 Android 7.0 (Nougat) or later no longer allows WiFi mode even for Verizon phones. Please use USB mode or Bluetooth mode instead using our software. This app now contains both FoxFi (WiFi mode, may not work on your phone – details below) and PdaNet (USB or Bluetooth mode).

You can now share your cell phone’s Internet connection with your computers or tablets through either USB, Bluetooth or even WiFi Hotspot on some phone models. Most importantly it does not require the extra tether plan (mobile hotspot plan) from your carrier. Also, NO ROOTING NEEDED for your Android phone.

The free edition will have timed usage limit, otherwise, it is same as full version.

Due to lockdowns through each phone system update, WiFi mode will only be allowed on a short list of compatible devices. As of 11/2016, IN GENERAL:

*To get around lockdowns on WiFi mode FoxFi may prompt you to install a certificate on your phone, this will cause the Android system to enforce a screen lock and show a security message in the notification.

USB mode works on almost all Android phones. It allows connection from Windows PC or Mac. In addition, PdaNet comes with a “WiFi Share” feature that can further turn the Windows PC into a WiFi Hotspot so that you can connect other devices to it and share your phone’s Internet connection.

*T-Mobile or MetroPCS users can only use USB mode with “Hide Tether Usage” enabled in PdaNet.
*If your phone is not recognized by your computer after connecting USB, please see http://pdanet.co/driver
*Please treat Windows tablets (non-RT) the same as Windows PC.

*A system bug in Android 4.4 for tablets will break Bluetooth mode, this is fixed in Android 5.0 or later.
*For Android tablets it is possible only the browser app will work in Bluetooth mode. That is because other apps may be looking for wifi or cell phone connection and not recognize the Bluetooth Internet.

*One way around the above two issues is to find a wifi hotspot to connect the tablet to at the same time (such wifi hotspot does not need to provide Internet access).